By the afternoon of August 27, 1776, the Battle of Long Island had rapidly become a life or death struggle for the American army. After distracting the American forces with an auxiliary diversion that morning, the British sprung their trap. The night before the battle, Generals Howe and Clinton had led 10,000 troops to the rear of the Americans in a flanking maneuver. After the Americans had fought off the British diversion to their front, the 10,000 British descended upon the Continental troops from the north. According to one American soldier, the Americans were entirely unaware of the presence of the large force to their rear, until “the main body of their army, by a route we never dreamed of, had entirely surrounded us, and drove within the lines, or scattered in the woods, all our men, except the Delaware and Maryland battalions, who were standing at bay with double their number.” [1] 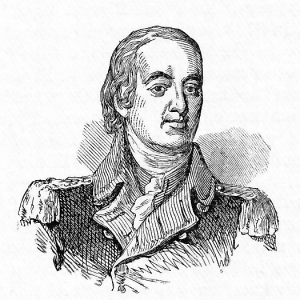 The Americans were suddenly surrounded and even more drastically outnumbered. Most of the American line disintegrated under the pressure of the British attack, except for the troops led by Lord Stirling, which included the First Maryland Regiment. However, by the time Stirling’s troops fell back from the fight they found that they had no good route to withdraw from the battle. Stirling’s men were trapped by British General Cornwallis’ troops, who blocked the Gowanus Road, which was the American line of retreat.

Stirling later wrote to General Washington that he “saw the only chance of escaping being all made prisoners was to pass the creek near the Yellow Mills” [2]– the creek Stirling wrote of was the Gowanus marsh. Stirling ordered his men to retreat by fording the marsh, but he stayed behind, keeping Major Mordecai Gist and half of the Maryland troops on the field to guard the men’s escape. These troops who remained on the battlefield to defend the retreat of the American army would become known as the “Maryland 400.” 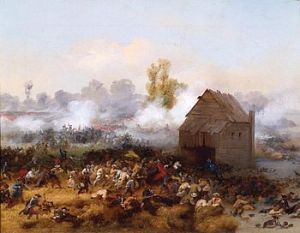 Standoff at the Cortelyou House, Battle of Long Island

Lord Stirling, Mordecai Gist, and the small force of Marylanders making up the rear guard rallied and attacked Cornwallis, whose troops were posted at the old Cortelyou house. Gist would later write of that day that Stirling “encouraged and animated our young soldiers with almost invincible resolution.” According to Stirling, the men attacked Cornwallis’ position five or six times before reinforcements from the British “rendered it impossible to do more than to provide for safety.” [3]

George Washington observed the desperate struggle from a Brooklyn hill, and is said to have exclaimed, “Good God, what brave fellows I must this day lose!”

William McMillan, a twenty-one-year-old Maryland recruit and Scottish immigrant, fought at the Battle of Long Island along with his brother, Samuel. The McMillans were among the ranks of the Maryland 400 on August 27. Decades later, William recalled the devastating casualties that the Marylanders absorbed. “My captain was killed, first lieutenant was killed, second lieutenant shot thro the right hand two Sargents was killed in front of me. Sometime my Sargent was shot… two Corporals killed.” Eventually, the Marylanders could not hold out any longer. William McMillan wrote, “we were surrounded by healanders [Scottish Highlanders] one side, Hessians on the other… my Brother and about– 50 or 60 of us was taken [prisoner].” [4]

Few of the Maryland 400 would return to the American encampments that night. Many fell in battle, some drowned in the Gowanus marsh, and many more were taken prisoner. [5] General Sullivan was caught by three Hessian grenadiers. Lord Stirling refused to give up his sword to the British and he eluded capture long enough to surrender to Hessian General De Heister.

The Battle of Long Island was a defeat for the Americans, who would soon be forced to withdraw from Long Island to Manhattan. However, the fierce defense by the Maryland 400 that day held off the British flanking maneuver long enough to allow the escape of much of the trapped American army. The men of the Maryland 400 had been called to make great sacrifices in their very first battle, and the Revolution was just beginning.

[5] Bryan Philpot, an ensign with the First Maryland Regiment, nearly drowned while attempting to cross the Gowanus marsh.

2 Responses to Becoming the Maryland 400